Many believe that Spring fully takes over Winter once storks return from the warmer climes. But there's so much more to these birds - the symbol of returning to the homeland, family and.. Well read on and find out for yourself! Storks are one of the most honored birds in Ukrainian culture. People used to call them ‘botsiun’, ‘boussel’, ‘buz’ko’ – in Ukrainian translated as God’s Bird (Божа птиця) – an indication of deep sacredness of this image. However, the stork is not some

Just like a sword symbolized affiliation to chivalry in Medieval Europe, in the 17-18th century sabres became an established symbol of the independent Kozak caste. In the words of a prominent Kozak culture researcher, Dmytro Yavornytsky, a sabre was something so dear to Kozaks that they called it ‘Sister Sabre’, ‘Mamma’ or ‘Dear Wife’. According to the same specialist, Kozaks glorified sabers over other weapons, especially rifles. They considered sabres ‘honest’ and noble wea

ENGINE POWERED KNEES OR THE TRUTH ABOUT «POVZUNETS»

After one of their tour performances in Spain (1962) Hryhoriy Chapkis, the then Virsky Ensemble soloist, was approached by a rather peculiar looking man – dressed in bright clothes, his green jacket had.. an omelette for a pocket square! The man said: «You think you can fool everyone, but I know there’s a trick, I know you have some kind of engine powering your knees!». Having said that he started closely examining the dancer’s costume, searching for hidden devices. The papar 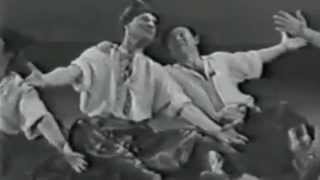