UKRAINE’S MOST FAMOUS BARD TAKES TO THE STAGE 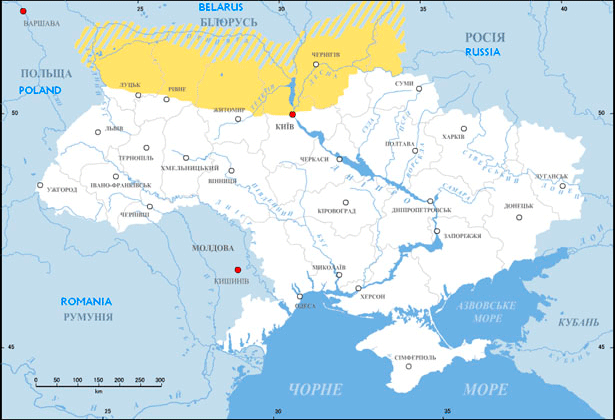 From east to west, across the northern border of Ukraine lies an interesting, geographically and ethnographically unique land called Polissia. The name Polissia comes from the word lis (Ukr. ліс) meaning forest or woodland. But Polissia exists not only in Ukraine. The region extends as far as Belarus, Lublin area in Poland and the Bryansk region in Russia. All of these ethnicities and cultures certainly had an impact on the history and culture of Ukrainian Polissia in general and its dances in particular.

The Polissia region has its characteristics that give reason to separate it into an independent ethnographic zone, interesting for its general cultural features and dance in particular.

Folk dances were born through the formation and historical development of the Polishchuks (people living in Polissia). Dances are the product of a peoples’ history, the reflection of their interaction with the environment. Dances bear the imprint of labor, they are the expression of optimism and wit - a measure of a nation’s spiritual strength.

The territory of Polissia is mainly made up of marshland, so reflecting these specifics, dance steps are elastic, jump-like, performed softly, in a lively manner, with a gradual advance. The main dances of the region include Polka with different ‘vykhylyas’ and ‘vykrutas’ (various turns), Quadrille, Kozachok, Hopak, Roundelay etc.

The formation and development of dance movements is often greatly influenced by a region’s costumes. After all, the structure of a movement often depends on the cut and components of clothes. Costumes determine whether a dance is restrained and slow or full jumps and broad steps.

Men's costumes consisted of a white linen shirt with an embroidered collar, worn over matching pants. Twisted linen, wool or hemp ropes or a leather homespun strap was worn over the shirt as a belt. The pants were sewn from homespun striped or checkered linen fabric. Polissian men also wore a straw hat, or a cap made of cloth or sheep skin. For shoes they used postoly or boots. As you can imagine such clothes gave the liberty to move around, do jumps and quick spins.

A popular Ukrainian Polissian piece is a dance called ‘Padespan’. This waltz-like dance is characterized by a continuous change of positions between partners. In different regions one can come across different names of the same dance, like: ‘Padispanets’ or ‘Pa-tispant’. The origins of this piece, however, go back to a ballroom dance created in 1898, consisting of elements typical for Spanish stage dance (from the French ‘Pas d’Espagne’ - literally Spanish Steps).

A dance popular in the Zhytomyr region is called ‘Shyr’. It has unified characteristic performance features from different parts of the region. For example in some areas it was performed as a roundelay, in others – as a quadrille. Not just Ukrainians consider this piece their national folk dance – it’s popular in Belarus under the name ‘Shor’, and as ‘Sher’ in Israel.

‘Sher’ or ‘Sherel’ also known as the ‘scissors-dance’ is the Jewish interpretation of the quadrille, danced throughout Europe in the 18th century. It was initially known as the dance of the tailors guild, and symbolically depicted the process of sewing. In Jewish weddings "Sher" symbolizes the tradition of cutting the bride’s hair before the wedding.

Polka also easily made its way into the lives of Ukrainians. It soon became one of the favorite, most widespread dances in Polissia (Zhytomyr area villages in particular), acquiring local characteristics. For example a dance called ‘Polka Tyts’, or ‘Polka-Niemka’ (literally ‘mute polka’) is an original Ukrainian production. The idea of this piece is that dancers stop every time musicians cease to play. According to witnesses, musicians loved playing pranks on those dancing, by stopping whenever they wished to and making the breaks as short or long as they pleased, sometimes having drinks during the pause.

And surely we couldn’t leave out the famous ‘Oira’! This dance is loved and performed in Belarus, Moldova, Russia and in many regions of Ukraine. In each place, it has acquired its own distinctive features. Even experienced skilled dancers will agree that performing the filigree detailed and polished steps of this polka is no easy task.

Other Polissian dances worth mentioning are ‘Krakowiak’, the ‘Karapet’ quadrille and many other fun pieces. Today, thanks to talented Polissian folklore specialists like Rafail Malinowsky, Valery Smirnov, Vasil Mavchur and others we have the great pleasure of seeing and learning various pieces from the region.

To master Polissian dances, in 2012 Ukrainian Dance Workshop Tour invited participants to work and learn from the renowned Rafail Malinowsky, the ‘Sonechko’ ensemble and from the people of Polissia.